One of my bigger inspection friends, Buddy’s favorite spot is to perch across the top of the couch. Photo: Contributed – (Photo: Hugh Cairns)

It seems that most homes that I visit have animals. On the outside we see mice, rats, racoons, snakes, chickens, horses, cow, critters and birds regularly. Inside we see pet snakes, tarantulas, ferrets, fish, hamsters, geckos and caged birds to name a few. But it’s cats and dogs that I see the most.

Cats are definitely the easiest to work around. I think that there are basically two kinds. Those that are seen and those that are not. The ones that are seen usually just hangout in their favorite spot and watch. They open their eyes every once in a while in an effort to seem interested. The ones that hide are a lot more fun. You never know where they may be lurking. Once discovered inside a closet or under a bed – they bolt without warning. Usually the path is around me, but it’s more like through me, it seems that I’m always between them and the escape door. As fast as a bullet, it never ceases to amaze me that they can exit a space in a fraction of a second without notice.

The common thing that cat owners request is not to let the cat outside. Written instructions are strategically placed in good spirit as reminders, but can be interpreted as burdens for home inspectors. It’s those unseen cats that we worry about. If we never see the cat how do we know that it already hasn’t escaped.  Who wants to be responsible for a lost cat? It can be a bit of a mind game.

I call dogs my inspection friends. Most are just bloody happy to see someone new to be petted by. Once past the pat and sniff test they seem to be pretty content. Definitely dogs are more interested in inspections. It’s probably because of the tools. Camera flashes going off, ladders being packed around and a new pair of shoes at the front door to be smell.

Dogs usually know something is up. Probably because they haven’t seen anyone go up into their attic or take the cover off of their electrical panel before. Sometimes they are a little wary, some are protective, nobody wants to think or believe their cherished pet would hurt anybody, but home inspectors that have been bit a few times always reserve a little bit of instinct to stay out of harm’s way. Again, I think their uncertainty is related to the tools. Thankfully, most pet owners take the extra steps to separate anxious or aggressive dogs from the inspection process. 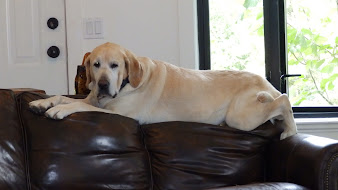